Today, I’d like to introduce a new kind of Karuta game that you can enjoy at home, called “Karu-uta”. I had a lot of fun with it myself and I highly recommend it! 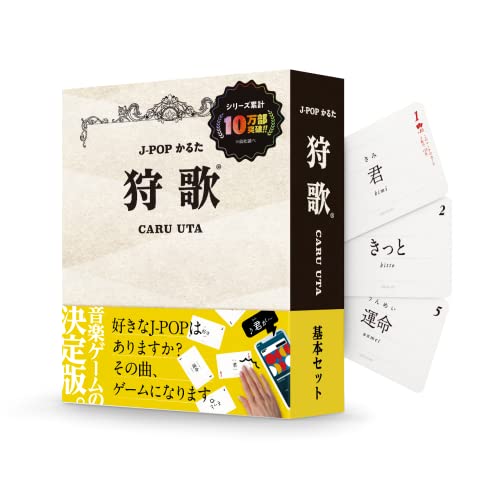 It is written as a hunting song and is read as “karu-uta”. This game is as the name suggets a “karuta” game in which the theme is to hunt for songs. Karuta is a game in which one player read the cards and others take the cards read. The winner of the game is the player with the highest number of cards taken. (The image below.) ※There are some minor rules, but I won’t go into them here.

There are two main differences between “Karuta” and

You have no idea what I’m talking about…… If I were to state it briefly. “Karu-uta” is a game in which you play your favorite song(Pop) and get the lyrics to the song. The picture below shows an actual “Karu-uta” .

How do you play it?

Spread the cards out on the table. Actually play or sing your favorite song. Take a card that matches the lyrics of that song. The back cover of the basic “Karu-uta” set.

This is all it takes to get the game started. Plus, you get to perform a song you made up yourself. Isn’t it fascinating how creative the game is? The actual rules were taken from the back cover of “Karu-uta”.

And here’s what’s in the box.

How to determine the winner. “Karu-uta” is actually not your average “karuta”, even the way it determines the winner. Such is the method of determining the winner of the “Karu-uta”. “The winner is the player with the highest total of points written on the card they took!” The number of points on a card ranges from 1 to 5, and there are 100 cards in total.

Looking at the picture above, you may have doubts about a card. It may be a card with a score of 1, written in red. If you take 3 of these cards, you can get a bonus of +10 points. If you take 3 ones, you get 3 points, but with this bonus, you get 10 points. You can even reverse the game !

Actually playing with it……

When I tried playing “Karu-uta” with my two friends, it was quite heated and exciting. By playing each other’s favorite songs, the tension is different from the usual “Karuta”.

This is game that can be played by families, couples to friends,young and old, men and women alike. By the way, this time we only introduced the basic set, but in fact, there are also expansion packs abailable.